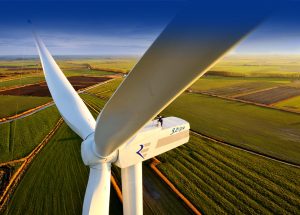 Many are celebrating the accomplishments being made by the power of wind.

The spring edition of the U.S. Department of Energy (DOE) Wind Research & Development Newsletter reveals a milestone year for the wind industry.

In 2016, the industry surpassed 82,000 megawatts of total installed capacity to make wind the number-one source of renewable generation capacity in the United States.

This year, the Wind Energy Technologies Office celebrated the 2-year anniversary of DOE’s historic Wind Vision Report, which quantified the economic, environmental, and social benefits of a future where wind powers up to 35% of the nation’s electrical demand by 2050.

In 2016, over 36% of the Iowa’s electricity was produced by wind power. Additionally, 9,000 jobs were supported by wind power, according to Iowa Wind Energy Association.

Building Energy is a global renewable energy firm headquartered in Milan, Italy and it has launched it’s new wind project here in the state.

The installation is made up of ten turbines across four counties: Story, Boone, Hardin, and Poweshiek.

According to COO of Building Energy, Alessandro Bragantini, these turbines are the first turbines in the state with three megawatt capacity.

The wind farm can generate up to 110 gigawatt hours annually, which is enough to provide electricity for 11,000 U.S. families.

“This wind project will help Iowa reach its goal of 40% electricity generated from wind power by 2020, Bragantini says.”