Home HAT News Feed Why Do We Eat Turkey on  Thanksgiving? 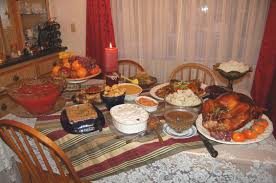 Today most of us will celebrate with Turkey on our tables and pumpkin pie. Nearly 88 percent of Americans surveyed by the National Turkey Federation eat turkey at Thanksgiving. The average weight of turkeys purchased for Thanksgiving is 16 pounds, meaning that approximately 736 million pounds of turkey is consumed in the United States during Thanksgiving. Yet, turkey and pumpkin pie was not served at the first Thanksgiving.  The Plymouth colonists did not have ovens, and the sugar supply that would have been brought from England would have been used up long before.  So there were no pies at the first Thanksgiving and no historical records of turkeys being roasted. There were also no potatoes since that vegetable had not yet been introduced into the new world. Corn, however, was part of the first feast and venacin, since the Indians brought 5 deer to the feast.

Abraham Lincoln made it a national holiday. But the idea of a national Thanksgiving holiday was not Lincoln’s. The reason we have Thanksgiving today is due in large part to the personal crusade of one woman. Sara Josepha Hale, the first female magazine editor in the US and author of the nursery rhyme Mary Had a Little Lamb, created the story of the first Thanksgiving.

This fictional account of the pilgrims and Indians celebrating was drawn from some diaries of early life in the colonies. Beginning in 1827, she began a crusade for a national day of Thanksgiving. She even started publishing recipes for turkey, dressing, sweet potatoes, and other staples of our Thanksgiving meals today, but that were not part of the first Thanksgiving. She is also the one who suggested the idea to President Lincoln, who saw the value of such a day to help heal the wounds of a divided nation.

While you are preparing you Thanksgiving meal, you may want to sing Mary Had little Lamb, in honor of Sara Josepha Hale, the woman who really invented Thanksgiving Day.