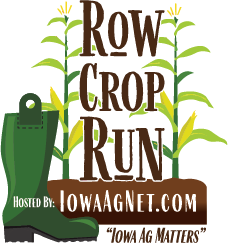 A select group of farmers have chosen to participate in the Iowa Seed Corn Cover Crop Initiative.

The project, founded in 2016, focuses on ways to increase cover crop adoption within the seed corn production system.

I traveled to northeast Iowa on Friday to visit with two farmer participants. We talked about the planting progress, as well as the spring season.

Tim Recker farms near Oelwein, in Fayette County. Recker implemented cover crops before his participation in the Iowa Seed Corn Cover Crop Initiative. He says he has learned a lot over the years, especially this past year. Recker recently spoke to the unfavorable weather conditions, which hindered cover crop seeding last fall.

“As soon as we harvested seed corn, we had two weeks of wet weather, which delayed planting of cereal rye. What we’ve learned though is we can plant cereal rye late in the fall. With the rain, we’ve been unable to plant beans into that cover, but we know the cover crop wicks water away and increases infiltration in soil. As soon as the weather straightens out, we’re going to get the first fields planted,” Recker said.

“In the old days, we use to pull out chisel plows, or some kind of tillage. Seed corn came off in September and then everything turned black by the first of October. Now, when the seed corn comes off, we pull out a planter. Then we’re planting cover crops and that’s the last time we’ll touch that ground for a full year and a half,” Recker said.

Now, fast-forward to spring: Rain continues to fall, delaying fieldwork across the Midwest.

Farmers have accomplished minimal fieldwork. The National Agricultural Statistics Service (NASS) reports corn planting at 58-percent complete, which is well below the five-year average. Tim Burrack, who also farms in Fayette County, speaks to his experience with the shortened planting season.

“I had a split plant, so I put the male in first. They (seed company) then wanted 85 heat units before they planted the female. We were fortunate. We had a day (where) we could plant the male. I went to planting commercial corn and (then) we got rained out. They (meteorologists) said, ‘It’s going to rain again,’ so we had to get the female in a little earlier than we want. We then planted the female and in between I was able to get my corn planted, thanks to the technology available today,” Recker said.

NASS reports soybean planting at 29-percent complete. Burrack considers “fortunate,” as he was able to finish planting before the next round of rain. Recker, on the other hand, is still needing to plant into his green cover.

“I think the biggest challenge is, since I don’t have my soybeans done, when will weather straighten out when we can get them in,” Recker said. “The other thing that concerns me is that rye. It’s looking great. We know that all we need is heat – we’ve got the moisture – and all of a sudden that rye will get ahead of you. You’re going to have to be able to get in, get it planted and get it terminated fairly quickly,” Recker said.