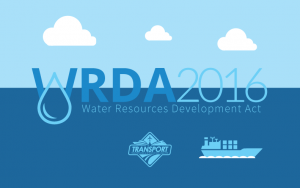 Water and Infrastructure Improvement may be a major focus of the incoming Trump Administration. What it all means for an Iowa farmer is yet to be determined. Sorting out what just happened in Congress and what may happen on the Mississippi River.

Lawmakers passed the 2016 Water Resources Development Act, or WRDA, in the final hours of the 114th Congress last week, but the bill does little for producers in the Upper Midwest.

It was a heavy lift by the House and Senate public works lawmakers: an end-of-session ‘save’ of key water infrastructure legislation that includes major locks, dams and dredging in many states.

But, other than mandating a flood damage reduction study for the Upper Mississippi and Illinois River basins, the 2016 WRDA bill breaks no new ground for locks modernization in the region.

More than half a dozen locks projects on the upper Mississippi and Illinois rivers have been waiting for funding for years since being authorized in an earlier Water Resources Reform and Development Act.

Central Illinois Republican, Representative Rodney Davis complained in September that’s long enough. “In word of 2007 congress authorized construction of seven new twelve hundred foot locks along the upper Mississippi and Illinois Waterway System. Yet, here we are nine years later and the corps still has not completed pre-construction engineering and design for these projects.”

Davis, a member of the panel that wrote the House version of WRDA, fought for an amendment to study removing the Army Corps of Engineers from managing the Inland Waterways Trust Fund. “Maybe this will finally show the corps that waiting ten or even twenty years for movement on a project that is authorized by congress is completely unacceptable.”

The Illinois lawmaker argues that delays in navigation locks are frequent and only getting worse, lasting as long as 12 hours at a time and costing farmers, shippers and ultimately consumers money.

Davis sought a study of the costs and benefits to transfer management of the trust fund to a not-for-profit, or government-owned corporation.

Meanwhile, the bill does not contain a public-private partnership that would have meant collection of tolls or lockage fees on tributary waterways. The locks advocacy group Waterways Council opposed the provision arguing it would have meant a huge increase in fees and urged instead a return to regulator biennial approval of water projects legislation.