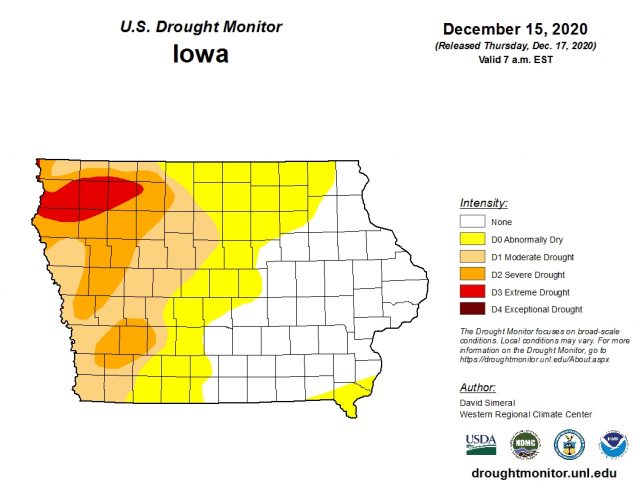 The US Drought Monitor on Thursday showed no change week/week for Iowa.

“It’s a slow time of year as we move into the driest season of the year,” Glisan said. “Really no agricultural impacts besides the subsoil moisture profile that we would like to see recharged for next growing season. My expectation moving forward, you won’t see a lot of degradation or improvement across the map, especially in western Iowa where we see the driest conditions for the state.”

“We have the 6-10 and 8-14 day outlooks that move us through Christmas and into the end of the month,” Glisan said. “On the temperature side, we see a red bullseye of above average probabilities for warmer temperatures, and then those brown colors indicating elevated probabilities for drier conditions. We’ve seen that pattern lock in pretty much for the last several iterations of these short-term outlooks.”

“The initial January outlooks show elevated chances of warmer than average temperatures,” Glisan said. “For precipitation behavior, there is uncertainty across the models used to produce the outlooks. Iowa is within the EC region, which we call the equal chance region, in which the probabilities are equal in terms of above, below, or near-average precipitation behavior.”

More information can be found on the Iowa Climatology Bureau’s website.