Home Whitney's Witness The Time I Trusted My Hammock

Those who know your name trust in you, for you, LORD, have never forsaken those who seek you. -Psalm 9:10 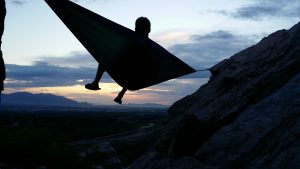 I adore hammocks. If it was socially acceptable, I probably would sell my couch in our living room and replace it with a hammock. It’s a spectacular day when I get to hang a hammock under a set of some beautiful trees, lounge, and read a great book. While I was in college, hammocking was pretty popular. One day late in the afternoon I was surrounded by a group of friends who were hammocking. At this point, I hadn’t really used my hammock very much, but I was eager to hang it, and hop in. I tied it in between the two trees and got inside, sat down, and it snapped. Down came my hammock, and down came me. I crashed against the hard ground, and all of my friends burst into laughter. One of the guys got out of his hammock, and began helping me try to fix what had happened.

Eventually, I found out that my hammock problem wasn’t going to be fixed in just a couple minutes. I needed new hanging straps. So, my hammocking for the day came to a screeching halt. The straps that I was using, were unable to support me. They were not worthy of trusting, but I did so anyway. I learned the hard way that day about resting myself in something that couldn’t hold me.

In my Christian walk, I think this hammock scene occurs quite a bit. I often put my hope, trust, and rest in something that cannot uphold me.

What are you trusting in that isn’t capable of doing so? Has there been something in your life that has snapped, and stopped your day from going the way that you had planned?

Friend, stop trusting in things that are not capable of doing so.  Everything you are putting your trust in is unstable if it isn’t Christ.