The 2016 Buchanan County Fair Queen is also the 2016 Iowa State Fair Queen. The Iowa Queen is Amanda Riniker. She is the daughter of Bruce and Jeanette Riniker of Winthrop, Iowa which has about 800 people. As of this fall, Riniker is in her second year at Wartburg College in Waiverly, Iowa. She is a Neuroscience Major, with a minor in Biology and Leadership. She has plans to become an Occupational Therapist.

Riniker competed against 102 contestants from all 99 counties. All those contestants had been crowned queen of their own county fair earlier this summer.

As well as the multiple sports Riniker is in, she enjoys helping on her family acreage raising 4-H and FFA livestock. “I grew up with 4H and FFA being a huge part of my life. I use to show animals and do projects at the fair.” She said that she use to show beef and meat goats.

Riniker shares that during the year she will be attending as many county fairs as possible, conventions, the Iowa Corn Dog Kick-Off, and much more. When the Iowa State Fair was mentioned she said, “One of my favorite parts of the fair is being able to try all the different foods. I think the food is one of the things that makes the Iowa State Fair so great!” 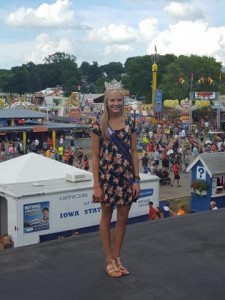