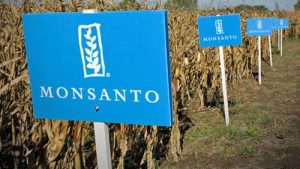 This is part of their commitment to develop and commercialize innovative microbial solutions for farmers.

Acceleron B-300 SAT derives from a fungus found in soil, and showed a two-year average yield advantage of more than 3 bushels per acre. The Acceleron B-300 SAT inoculant will be applied to all of Monsanto’s new 2017 corn hybrids sold in the United States.

With Acceleron B-300 SAT inoculant, scientists from Monsanto and Novozymes have developed a formulation that, when seed is stored in proper conditions, is viable for at least two years on the seed and is generally compatible with other seed coating chemistries. This allows Monsanto to coat the seeds with the microbial product before the seeds are shipped to retailers and farmers. Acceleron B-300 SAT inoculant is the first ‘upstream’ corn inoculant ever developed.

Acceleron B-300 SAT increases plants’ ability to take up nutrients and is an improved formulation of the JumpStart® inoculant (Penicillium bilaiae), a product that existed in Novozymes’ pipeline before the formation of The BioAg Alliance.

The Vice President said they believe it could be applied to more than 90 million acres by 2025 and become one of the biggest biological products in the ag industry.

Colin Bletsky, Novozymes’ Vice President for BioAg said, “Harnessing the power of nature’s microbes, farmers will be able to produce more crops while helping farmers use fertilizer more efficiently and producing less CO2. This will benefit agriculture, consumers and the environment.”