In these days of outlandish claims of discovery on the Internet, a scientific paper has emerged which may actually be true. Scientists at the Oak Ridge National Laboratory a legitimate place, have been able to make ethanol out of carbon dioxide by using a small electrical charge and a catalyst.

Past that I am lost but the discovery, if valid, could solve two major problems we face in the world today: First, it would be a means to reduce the volume of CO2 and therefore reduce its influence on global climate change and it would be a way to store renewable energy, using solar or wind to make electricity and then using that fleeting energy to make ethanol which could be stored and used at any time.

Do I understand this? No! However, Dr. Robert Brown does. Brown is a mechanical engineer, and head of the Bioeconomy Institute at Iowa State University.

“The most significant thing about this recent development is the selectivity for converting carbon dioxide into ethanol. There has been a lot of researchers that have looked various processes for utilizing carbon dioxide, and often the problem is you end up with multiple products, so then you got issues,” said Brown.

There is not yet any indication of scale ability of this technology, nor any commercial development. 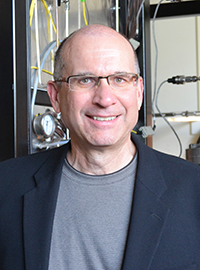