Jimmy Sneed is a director on the United Soybean Board who farms in Hernando, Mississippi, not far from the Tennessee border and the Mississippi River. He says widespread fungicide resistance is a concern, “because it’s already beginning to show up, and that’s one of the things that we hope we learn from the Roundup resistance issue,” he told HAT. “We need to get out in front of it and that’s what we’re trying to do now by educating the farmers to the issue itself number one, and number two try to give them some strategies to manage the issue.” 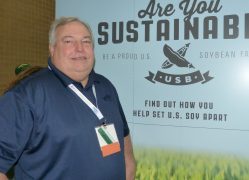 And some of those strategies you’ve heard many times in the past.

“Something as simple as scouting,” he said. “Another thing is understanding what the thresholds are and making sure you don’t spray until you reach thresholds. Then of course the foundation of our take action is using different modes of action and that same strategy works well with fungicides too, and rotating your modes of action.”

Sneed told HAT USB hopes for the same kind of success with fungicide awareness that they’ve been able to see with Take Action on Weeds.

“We are really, really pleased with it,” he explained. “Industry has really come on board and been great partners. Universities have come on board and have really bought in and given us a lot of help on the technical side as far as management strategies. Several associations are involved too, so we are just really, really pleased with the partnerships we’ve been able to develop with other organizations to benefit all farmers.”