Home 5 Ag Stories Save on Gas This Holiday Season by Filling Up with Super Duper... 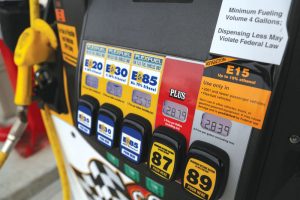 Due to agreements by the Organization of Petroleum Exporting Countries (OPEC), gas prices are expected to rise this holiday season.

In some Midwestern states, prices have risen as much as 28 percent from previous weeks. In Iowa, prices for unleaded gas remain around $2.21 compared to $2.08 a month ago.

Before you cancel that holiday road trip to see Grandma, consider fueling up with E15, the best value, higher-octane fuel made from 15 percent ethanol and 85 percent gasoline.
Iowa corn farmers have launched a new communications campaign to educate consumers on E15, calling the fuel, ’Super Duper Unleaded’ which refers to the fact E15 contains five percentage points more ethanol than E10, also known as Super Unleaded.

“Many consumers get to the pump and automatically reach for Super Unleaded because it’s the cheapest fuel, without realizing Super Duper E15 can save them even more money,” said Iowa Corn Promotion Board President Larry Klever, a farmer from Audubon.

“Although E15 is the best value, many believe you must own a flex-fuel vehicle to use it, which isn’t the case. The ‘Super Duper Unleaded’ campaign is a fun and lighthearted way to let everyone know E15 is very similar to Super Unleaded — but even better. It’s ‘Super Duper.’”

E15 is the most tested fuel in history, and the U.S. Environmental Protection Agency (EPA) has approved the fuel for use in all model year 2001 and newer vehicles, including cars, light-duty trucks, medium-duty passenger vehicles (SUVs), and all flex-fuel vehicles (FFVs). This approved group of vehicles includes more than 80 percent of the cars, trucks and SUVs on the road today.

“E15 is a good thing for consumers, retailers, and the state of Iowa,” explained Klever. “Ethanol is a renewable fuel made from Iowa corn that is cleaner burning. And when you use E15 at the pump, it saves you money, supports Iowa jobs and lessens America’s dependence on foreign oil.”