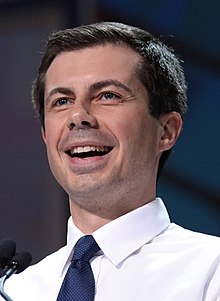 During the press gathering, Buttigieg was asked a fair share of questions regarding immigration and gun control, which comes as no surprise due to his time in the military as an intelligence officer, including a deployment to Afghanistan.

As for midwest specific press, the democratic candidate discussed his plans for involvement with rural America.

“Well, I think rural America is beginning to see all the ways in which they are being neglected by this administration. But you look at everything from policies that have eviscerated the soy industry here, to the Secretary of Agriculture who says farmers are whiners, you begin to realize they don’t actually care. It’s very similar to what we’ve seen with workers. A lot of talk about doing things for workers, and then the biggest achievement they have legislatively is a tax cut for corporations and the wealthiest. Rural America is hurting right now. Farm income is down half from what it was five years ago. And these policies are making it worse. So, we may not be able to win everybody over, but I absolutely believe in campaigning, as we’ll be doing the next few days,” said Buttigieg.

“I think once again, they’re saying one thing. Even this Trump White House knows that the American people are paying for these tariffs. A tariff is a tax, and that tax is being paid for by Americans–that’s how it works. Now, we’re already standing to lose more than eight-hundred bucks per household as a consequence of these tariffs. We are going to feel this, this is going to hurt in our pocket books at home. The fact that he doesn’t want them to hit as Christmas shows that he knows he’s doing harm to American consumers,” stated the South Bend Mayor.

Pete says he has high hopes for improvement in American trade.

“I believe that we can and should participate in trade diplomacy if it is to the benefit of American workers. Too often that is not the case. I come from a part of the country that was told to go along with these trade deals, the pie is going to get bigger and everybody will be better off. Well the pie got bigger, but we didn’t get a piece of it. That’s why there’s such anger in my part of the country around these deals. It doesn’t mean that we need to close off our economy. There are many that we can win, but we have to actually deliver for workers, and, while we’re at it, farmers. Otherwise, it’s not worth it,” said Buttigieg.