Oil and ethanol proponents met in Washington, D.C. on Tuesday to discuss the future of biofuels policy.

Senator Grassley reports all parties agreed to the year-round sale of E15 during Tuesday’s meeting. The move increases the sale of E15 from eight months to 12 months.

“That’s good news for farmers and consumer choice at the pump,” Senator Grassley said. “Allowing higher blends of ethanol to be sold in the summer months fits in well with EPA’s deregulatory agenda. There was also an agreement to not pursue an artificial cap on RIN prices, which would have destroyed demand for biofuels and hurt biofuels workers.”

Senator Grassley says the group also agreed not to cap Renewable Identification Numbers (RINs). However, he adds the “devil (is) in (the) details,” while hinting at a plan from Secretary Perdue and Administrator Pruitt 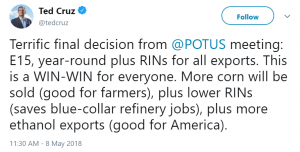 Senator Cruz shed some light on the potential plan, by tweeting, “Terrific final decision from @POTUS meeting: E15 year-round plus RINs for all exports.” Cruz said the “decision” is a “WIN-WIN for everyone.” However, Growth Energy CEO Emily Skor disagrees.

“Attaching a RIN to ethanol exports would have a crippling impact on American agriculture – reducing demand for ethanol and corn,” Skor said. “It would also have trade implications because export RINs would be considered a subsidy by our global trading partners. Finally I would add that export RINs are a clear violation of the RFS, which is intended to increase domestic use of biofuels and is in no way connected to the exports of biofuels.”