A western meadowlark garbled its charming call, watching over me from a charred tree limb as I rolled up strands of ruined barbed wire crossing through the bird’s former grassland home. In the place of the endless stretches of native grasses and forbs waiting on rains to burst with spring growth, blackened hillsides sprawled out in every direction. Despite its pleasant sound, one would have to guess that the state bird of Kansas serenading me was none to happy, having lost its home and livelihood in the few minutes it took the fires to sweep through the area driven by fierce March winds.

Like that lonely meadowlark, many ranchers in the area lost everything in a matter of minutes and we were there to offer a helping hand. In March, I had the wonderful privilege of travelling with a group of Ohioans to deliver supplies and get some work done in Clark County, Kan. where hellish wildfires decimated pastures, facilities and equipment on cattle ranches. Just in that one county more than 460,000 acres burned in March wildfires. Thousands of cattle and horses were killed. Over 4,000 miles of fence were destroyed in Clark County.

Ty Higgins talked with rancher Greg Goodnight of Englewood, Kan., for the Farm and Country Radio program. Englewood is in the southern part of Clark County near the Oklahoma state line with a population of less than 80 people.

“In the middle of January, we had a 100-year ice storm. It was more ice than we’d ever seen. It brought down high line poles by the thousands. The power companies came through and replaced most of the poles that were down and planned to come back this spring and repair the damaged poles. Then this windstorm hit us with 60-mile an hour straight winds with gusts up to 76 miles per hour. We heard that 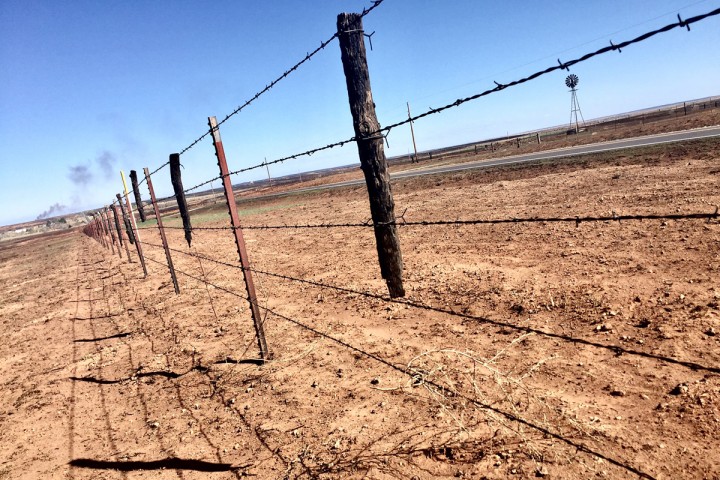 one of the poles that hadn’t been replaced yet broke and brought the power lines down. It sparked and took off from there,” Goodnight said. “When you could see them, the flames were 40 feet high at least and the fire was running anywhere from 40 to 60 miles per hour. Once it got to the east of my ranch there is more farm ground over there and they say flames were actually travelling through the smoke and jumping hundred acre fields. It was impossible to stop this thing. I was on a fire truck with hired hands. We went out to meet the fire where it started and we couldn’t do anything with it. We just had to bale out and go to the houses and try to protect the structures.”

The word devastating does not quite cover it.

“I’m one of two producers in Clark County who can say I lost zero cattle. I had to put two horses down that got burned but all of my cattle were on wheat pasture and wheat was the only safe place to be,” Goodnight said. “For many of these producers around me they all had cows and calves and there was around 70% death loss. Those cows were possibly worth from $1,500 to $2,000 apiece and those calves were worth around $400. If they have 100 head and then multiply those dollar amounts by 70 head, it is a big cost. They lost a calf crop, and all their hay and their grass. I feel so bad for all those guys running momma cows. I run stockers instead of momma cows. You don’t just go out and put a cow herd together like I could stock this place with yearlings.”

Replacing the cattle lost will take years to accomplish. Another massive challenge is the damage to fences.

“The biggest detriment right now is the cost of fencing material. They estimate the cost of fence in Clark County alone is $41 million. A mile of fence to put in with labor costs in there is $10,000 a mile. My ranch alone lost 20 miles of fence. We have just right at 100 miles of fence on my ranch,” Goodnight said. “The rest of it we are going through and repairing. Some of the guys have to totally repair fence.”

Kyle Kaltenbach manages the Rhoades Ranch just outside of Ashland, the Clark County seat. The 6,500-acre ranch had more than 200 cows in a cow calf operation and is now left with around 40 un-burnt acres.

“The first fire started maybe 20 miles from here to the southwest. Another fire started to the north 15 or 20 miles. The wind was out of the south and then it switched from the north. That is when the fire that hit place came south. It was moving 60 to 70 miles per hour with the wind gusts. The only way we could save cows was mainly with getting them to wheat fields. Out of 207 cows we got 40 or 50 on wheat and we lost around 33 cows,” Kaltenbach said. “To the north there is a 35,000-acre ranch right where the wind shifted and it completely burnt in around 30 minutes. It is hard to understand just how bad it is burnt until you get here and look at it.”

Though the disaster in the area garnered relatively little national media attention, the nation’s agricultural community took notice and responded in truly incredible ways. Thousands of loads of donated hay, feed, and fencing supplies have crowded the streets of the tiny towns of Clark County. A sea of volunteer workers has flooded the parched landscape of the area with helping hands from around the nation. It has been truly unimaginable for the locals. 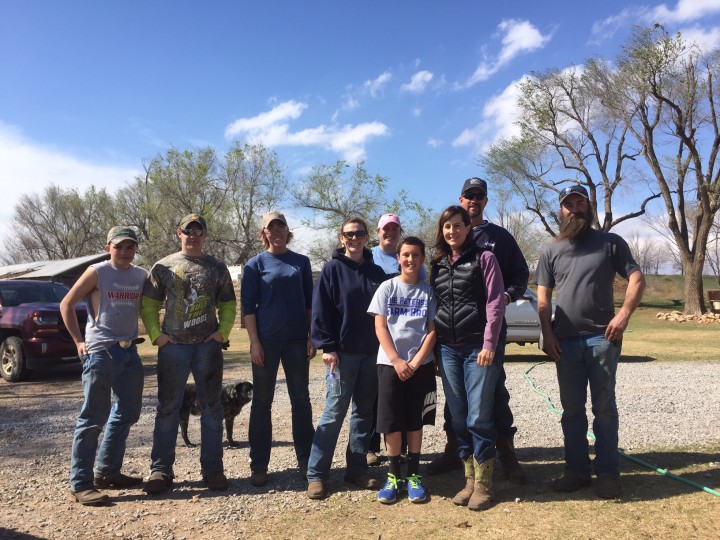 Group shot after a day working with John Kellenberger D.V.M. and his fantastic family.

“The first night I laid down to go to sleep after the fire I remember thinking, ‘How is God going to be glorified in this?’ It has been so easy to see that,” said Dr. John Kellenberger, D.V.M. with the Ashland Veterinary Center, Inc. “It has been a blessing just to see how other agricultural people reach out to one another when there is a problem and how our local community has really stepped up. For the first week our veterinary clinic really served as the command center. We were receiving all the calls and handling donations and trying to get all of the hay directed right to ranches. That was becoming overwhelming. People stepped up though and took care of different areas and that allowed all of us to get coordinated. Our community has been wonderful. All of the fire departments in this area are 100% volunteer and many of the gentlemen and ladies on the volunteer fire departments were saving someone else’s pasture or house or cattle while theirs were burning. That is just a way of life here. To see the relationships not only locally but between people from away from here that have been built, that is where the glory of it has been.”

Kellenberger has experienced the fire’s toll on livestock from the front lines of his ranch and many others in the area.

“We are almost 100% ag-driven as an economy and beef cattle are the No. 1 cash crop, if you will. What a lot of people don’t understand is that grass is a cash crop just like wheat. It turns into dollars via pounds on beef cattle,” he said. “We have lost 400,000 to 600,000 acres of grass in our practice area and with that we have had devastating losses with the cattle population. Some ranches have 80 to 100% death loss across their ranch on their cattle herds.

“These people put the cows in front of worrying about their own house that burnt. They had to make the choice whether to save the cows or save the house. Without exception, they went to save their cows.”

After the grim task of putting down hundreds of badly injured cattle, area veterinarians and ranchers still have tough decisions ahead.

“We are dealing with cattle that will not be productive moving forward in the sense of poor udders, lack of milk production or the calves’ lack of ability to suck,” Kellenberger said. “They will either need to be humanely euthanized if they are bad enough or taken to a sale or slaughter.”

The Federal Livestock Indemnity Program is crucial in helping offset some of the devastating losses, but can also create some tough decisions.

“Some of these cattle could go safely into the food chain but our understanding is that the LIP program is all or nothing. If you take them to slaughter and they bring $500 and that cow is worth $1,000 in an indemnity program, you either choose one or the other. You don’t split it. The way the program is written right now you can’t do both,” Kellenberger said. “We are working to change that. We are put in the position now trying to make humane decisions with the economic burden placed there as well.”

The amount of work to get the damaged ranches back up and running is difficult to comprehend, but the relief efforts from around the country are making a difference. Our group from Ohio hauled more than 40 loads of hay, fencing materials, feed and other supplies to Clark County and 24 volunteers stayed to help for three days, mostly tearing out damaged fence to prepare for building new. More groups 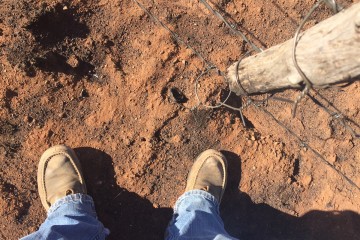 This was pasture before the fire

from Ohio have gone since.

“We need to find a way to harness the energy and passion for Ohio folks to help out in these situations in the future,” said Melinda Witten, with the Ohio Farm Bureau, who was part of our Ohio group working in Kansas. “The first thing we need to do is find out what they actually need on the ground. After speaking to all of the folks out there, they kept saying that, ‘We were totally unprepared for this.’ My thought was, ‘How could anyone be prepared for such a natural disaster like this that happened so quickly?’ If that were to happen in our area, how could we mobilize those around us? Moving forward we need to find a way to have a cohesive plan to address these situations.”

The waves of generosity from Ohio and around the country have only been successful, though, due to the heroic coordination efforts and hospitality of the local community.

“There are a lot of good people in he world. Not just the volunteers and the people who delivered and donated supplies, but the people in Ashland, Englewood and Minneola. Those people were so kind and compassionate towards us. This helps you have faith in humanity overall,” said Sara Tallmadge from Ashland County who went on the trip with the Ohio group. “I wanted to thank everyone who supported us. It is not just us — it is everyone who has donated. We are all part of this together.”

In a place with so much loss and devastation, the helping hands and donated supplies coming from a united agriculture from around the nation offered reasons for hope and a glimpse of God even sweeter than the meadowlark’s song.

For much more from this trip, check out the Ohio Ag Net Week 4 Podcast.