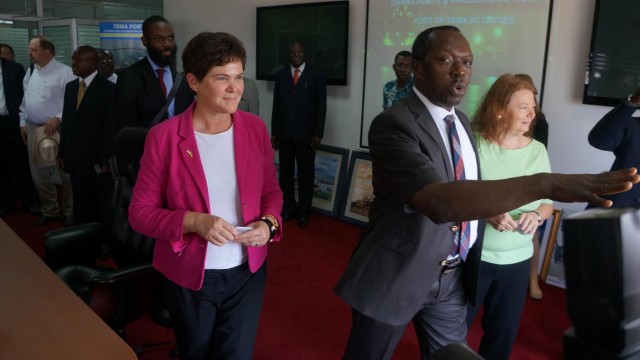 Just before Thanksgiving, I was part of a U.S. Department of Agriculture delegation that traveled to Ghana in West Africa.  Krysta Harden, Deputy Agriculture Secretary led the group of U.S. businesses interested in expanding trade with this growing and relatively stable west african nation.

The trip wasn’t about tourism, it was about trade.  But until two cultures know each other, there are oddities and uncertainties that distract from the real goals of both sides.  An examination of Ghana’s port facilities for import and export, in a moment.

As the only reporter on the Ghana Trade Mission with USDA Deputy Secretary, Krysta Harden, I was given access to every event and preference in talking to Ghanaian and American spokespersons.

Ghana is an English speaking nation that drives on the right side of the road.  They like Americans and have been independent from Britian since 1957.  The government is ranked at the 63rd least corrupt in the world..one of the top five in Africa….That says a lot for why trade with Africa has been slow in coming.

The Port is just outside Accra (A- Craw), the capitol, on the Atlantic Ocean.  Ghana is about 5,000 miles from New York City….and sits just north of the Equator almost straight south of Britain….Find 00 x 00 on a globe and it is the closest country.

I walked through the port with the delegation on a very hot morning Ms. Harden spoke to the assembly of Ghanaian Dignitaries and Port Employees.