When Joseph woke up, he did what the angel of the Lord had commanded him and took Mary home as his wife. But he did not consummate their marriage until she gave birth to a son. And he gave him the name Jesus. -Matthew 1:24-25 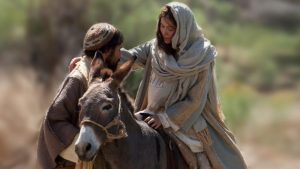 Imagine being Joseph, the husband of Mary and father to baby Jesus.

Your fiancé is pregnant, and not by you. Her baby is adored by many, who flock for just a glimpse of the newborn son. You are tasked with protecting them both. It is your job to teach a kid, but not just any kid….. the son of the Almighty.

An acceptable response in that culture would have been for him to reject his pregnant fiancé. He could have scorned her, ridiculed her, and even got her stoned. Men in that culture were the dominant figures in a family, not inclined to bend to a woman’s needs.

However, Joseph was a man not like most men. He was a man of God. That’s why God picked Joseph to help Him in carry out a very important task.

You see the godliness in Joseph when you recognize how spiritually sensitive he was. His response to Mary’s pregnancy, his rejection of her apparent sin, and his compassion illustrates his godly character.

Joseph was unselfish, assuming fully the role of being the father he was called to. He offered Jesus physical protection during his infancy and childhood. He trained him in the carpenter’s trade, and he gave spiritual direction to Jesus by example and instruction.

Joseph, was capable of handling adversity. Joseph’s decision to wed in the face of Mary’s apparent infidelity, sparked criticism from those around him. He endured the difficult circumstances of traveling during Mary’s pregnancy, and later had to flee to Egypt out of fear for Jesus’ safety.

Joseph was a good decision-maker. When faced with the fact of Mary’s unexpected pregnancy, he didn’t react in bitter emotion and disgrace her publicly. He was objective, reflective, and, ultimately, resolute in his decision-making.

When you are a follower of the Lord, poverty is no barrier. Joseph was a carpenter. Since God didn’t choose a well-to-do man to father Jesus, we can rest assured that our financial limitations don’t stop us from impacting our world for Christ.

Obedience is the basis for leadership. Nothing in the biblical record suggests that Joseph was charismatic or flamboyant. He was obedient and humble.

He obeyed civil decrees, Old Testament laws, and angelic direction. Because he was willing to submit to every legitimate authority, God entrusted him with a significant leadership role that will change lives forever.

Prayer: “God, thank you for using a man like Joseph to bring your sons fulliment to this earth. I pray that I have the obedience, leadership, and listening ear to you like he did. In your name I pray, Amen.”