The gasoline used by more than 95 percent of Americans, E10, 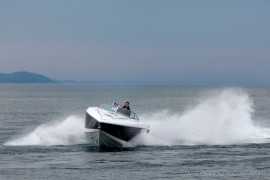 contains 10 percent ethanol and is safe to use in marine engines. All current boat engines are warrantied for E10 and have been for nearly two decades. Yet for some reason, BoatUS has chosen to ignore this information and the countless owner’s manuals expressly approving the use of E10. They are preying on people’s fears instead of looking at the facts.

Proper care and maintenance are the best and easiest ways to protect boat engines. While E10 is a safe, reliable fueling option for both marine engines and automobiles, higher ethanol blends, such as E15, are not approved for use in marine engines.

Furthermore, no consumer is required to fill up with an ethanol blend, but E10, E15 and other fuels do give consumers the sorely needed ability to choose a fuel that meets their price and performance needs.

As the owner of CK Motorsports, a premier certified Mercury Marine Engine & Racing service dealer that services 400-500 boats annually, and has for over 20 years in Nunica, Mich., I believe it is important to set the record straight when it comes to ethanol and marine engines.

Here are just a few facts and observations I have made over my 20 years servicing marine engines:

Finally, it is important that all marine engine owners follow the instructions for normal storage preparation found in the operation, maintenance and warranty manuals. Failure to follow the proper operating procedures is the number one reason why boaters have fuel issues.

The bottom line is that if you have engine troubles, there are many possible causes, and you should not immediately assume E10 is the problem because the facts and my 20 years of experience show that ethanol is not to blame.

It’s time to stop the misinformation and scare tactics – it’s time for consumer choice, cleaner air and improved conservation efforts. That is what CK Motorsports believes in, because ethanol delivers.