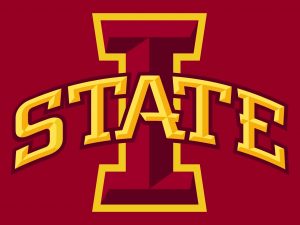 It is projected that the world population will reach 9.5 billion people by the year 2050. That will require more produced food in the next 35 years than has ever been produced in the last 10,000 years combined.

Iowa State University has 750 research projects that are tied to scientists supported by Iowa State’s Agriculture Experiment Station. The university is actively building even more collaborative relationships with businesses in Iowa and around the world in food and agriculture, partnerships.

Just a few weeks ago, Iowa State College of Agriculture and Life Sciences (CALS) faculty received the U.S. Department of Agriculture’s top partnership award for multi-state research for its research of the future of corn production in a changing climate.

More than 70% of CALS graduates remain in Iowa to begin their careers.

Through Iowa’s Cultivation Corridor public, and private partners are working with closely with Iowa State to encourage innovation and accelerate growth in the agbioscience, biorenewables, biotech and advanced manufacturing industries.

Last year, the Corridor worked with partners to deliver more than $560 million in capital and research investment activity to Iowa, which created or retained nearly 700 jobs.

Iowa State’s success since 2012 in advancing agriculture has mirrored the university’s broad enrollment growth and success in recent years. There has been a 12% increase in research funding and advancement of projects such as the expansion of the ISU Research Park and the opening of the ISU Economic Development Core Facility, where ISU offices engaged in economic and community development.

The efforts are paying off for Iowa’s economy, giving talented people a reason to stay in Iowa, and solidifying the state’s status as a leader in feeding the world.