Then Jesus told his disciples, “If anyone would come after me, let him deny himself and take up his cross and follow me. -Matthew 16:24 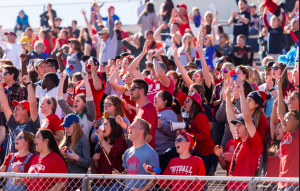 This last Saturday I traveled to my Alma Mater school MNU, to celebrate it’s 50th Homecoming. We happened to be playing our rival, Baker University. So, we knew it was going to be a good and competitive match up. At halftime we were leading over Baker 17 to 14. The MNU crowd was pumped. They were on their feet showing pride, cheering for our players, and praising our coaches.

By the second half of the game things began to get sour, as Baker began leading. Eventually, we lost with a final score of 34 to 55.

I like football. I cheered for it in high school, my dad coached my oldest brother when he was little, my younger brother currently still plays it, and my husband played college football. I like football, but I’ve learned I don’t take it as seriously as all the other people do around me.

As I watched the game unfold, and Baker begin taking the lead I watched how ugly fans got. I noticed that it didn’t take long, or take much for people’s loyalty to change. As we began loosing I heard fans shout, boo, criticize, and become extremely frustrated.

Watching fans get all riled up this weekend, I heard God speak into my spirit and say “This is what a lot of Christians look like.” I got to thinking, and it’s the truth.

As I sat in those stands, I looked around and realized that I do not want to be a fan of Jesus. I don’t want to stand to my feet and cheer and praise him when I’m winning in life, and as soon as something starts not going my way I start hurling insults, criticizing, and sitting down out of disgust.

Friend, refuse to be a fan of Jesus today. Be a follower. Followers are loyal. Fans are flighty and temperamental. There is no room for fan like spirit in the mission of God.

Prayer: “God, I do not want to be your fan. I want to follow you. I want to love you the same during the worst times as I do during the greatest times. In your name I pray, Amen!”