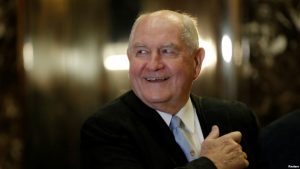 Former Georgia Gov. Sonny Perdue is reportedly the leading candidate for secretary of agriculture, one of just four Cabinet positions President-elect Donald Trump has not yet filled.

The governor “won stateside office twice, theoretically making his confirmation easier,” Politico’s Playbook reports. Perdue is a doctor of veterinary medicine and saw Georgia through one of the worst droughts in its history, even leading a public prayer for rain on the steps of the state capitol building.

Trump has been heavily criticized for not yet appointing any Latinos to his Cabinet; the selection of Perdue would mark a rejection of Cuban-American Dr. Elsa Murano and Mexican-American Abel Maldonado, who were also considered for the position. In addition to agriculture, Trump still needs to appoint the head of national intelligence, the secretary of veterans affairs, and the U.S. trade representative.