Home Whitney's Witness For Such A Time

And who knows but that you have come to your royal position for such a time as this?”  -Esther 4:14 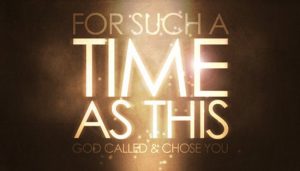 I talked about Esther yesterday, and the power of her tears. Esther had another power too, and that was knowing what she was created for.

When Mordecai sends Esther word that the Jews are going to be annihilated, he basically tells her, “Don’t think that you can just ignore this. Yeah, I know it’s been tough, but this is your destiny. God put you here. It’s no accident that you are a Jewish girl and now the queen of Persia.”

Her calling wasn’t easy. It was against the law to approach the king without being summoned. If someone did, it was punishable by death. If Esther remained quiet, she would likely enjoy a life of luxury and ease. She counted the cost, and chose to help her people, and do what she was called to do. Because of Esther’s faith, courage, and the answer to the calling on her life….she helped save her people.

Just like Esther, where you are right now is where God has you in each moment. Where you are is your kingdom.

Will you recognize the moment in which you are called? Has God put you right here, right now, for just such a time as this?

Prayer: “God, thank you for where I am even, if I’m not sure hat I love being in this particular kingdom. Thank you for creating me for a purpose, on purpose. Help me to recognize my calling. In your name I pray, Amen.”