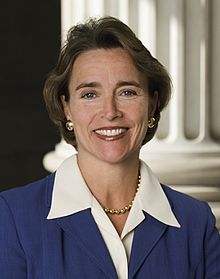 Well over a year ago, Farmers for Free Trade was founded as a non-profit with an objective to enlighten rural and urban citizen on the benefits of free trade. The organization travels across the United States, meeting with various commodities to discuss the importance of free trade as it relates to each group.

Former Arkansas Senator Blanche Lincoln joined the Farmers for Free Trade effort earlier in the year. Most recently, Lincoln has been on the coasts visiting with winemakers in California and dairymen in Pennsylvania. Since then, Lincoln appeared at the Iowa State Fair to show support for the United States-Mexico-Canada Agreement (USMCA).

The Arkansan explained her personal mission as she works on the road with Farmers for Free Trade.

“It’s really important for us to be focusing on getting this done, because if we don’t get it done before the end of this year, our chances of getting it done begin to fall back. So we want people to know that they have a voice and a responsibility to exercise that voice, and really talk about what’s important to them.”

“Agricultural producers across our country know that their markets are critical. Some of the retaliation we’ve seen, just being in California with the wine-grape growers. They were unable to get their wines into Canada with the retaliation. There’s so much there that happens. And when it happens, it’s not like something you can go–well, wine maybe, but other crops–you can’t just go store them in a warehouse for 10 years,” said the Senator.

Senator Lincoln stated there shouldn’t be much hold-up for the USMCA.

“Farmers produce the safest and most abundant, affordable food supply in the world. And we do it so abundantly that our trading partners are critical. It’s a critical part of our economy. Twenty-five years of NAFTA (North American Free Trade Agreement) has been good. It’s been good for Arkansas, it’s been really good for Iowa. And there’s no reason why we shouldn’t update it and move forward,” said Senator Lincoln.