Spring is usually a time for optimism for ag producers as they look forward to another crop, but not this year. Low commodity prices, ongoing high input costs, and low income projections have producers feeling more pessimistic about their industry than ever before, according to the latest DTN/The Progressive Farmer Agriculture Confidence Index (ACI). Overall producer confidence dropped from 92.7 last December to a new record low of 91.5 in March. The value of 100 is considered neutral. Values above 100 indicate optimism, whereas values below signify pessimism.

Producers’ attitudes for the present situation remain pessimistic at 94.5, up slightly from 92.2 but down significantly from 109.1 last March. Producer expectations for the future dropped for the second consecutive survey, down from 98.0 last August to 93.1 in December and then to 89.5 in March. “Farmers continue to struggle with balancing high input costs and low crop prices,” said DTN Markets Editor Katie Micik, director of the confidence index. “With ongoing global row crops surpluses, farmers see little hope to improve incomes this year.” 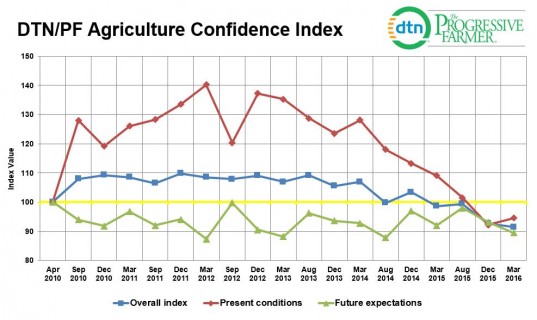 The confidence index, which surveyed 500 crop and livestock producers March 1-10, measures the sentiments of crop and livestock producers on their overall agriculture sector impressions. Since 2010, DTN/The Progressive Farmer has conducted the ACI three times a year – before planting, before harvest, and after harvest. Producers also rate current and long-term input prices and net farm income to gauge their attitudes toward the present situation and future expectations

In the March survey, 45 percent of farmers described their farm income as bad and 40 percent said income was normal. Micik said this is the second consecutive survey in which more producers considered their current farm income as bad than as normal.  “Over the next year, 86 percent of producers surveyed expect farm income will stay the same or get worse. It is also the second highest recorded in ACI history behind only the 88 percent in March 2012,” said Micik. 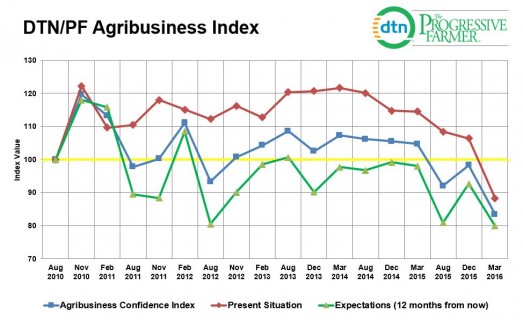 Fueling a good deal of the pessimism that producers have is the uncertainty over several key economic and policy issues. “The value of the U.S. dollar, the outcome of the RFS, and the implementation of the WOTUS rule are all weighing on farmers minds,” said MIcik.

Other ACI findings include: