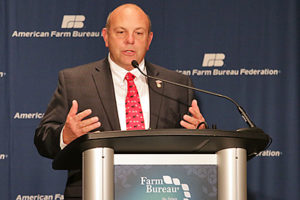 The American Farm Bureau Federation kicks off their annual meeting Friday in Nashville. It runs through Tuesday. Last year, was a busy year for AFBF when it came to influencing agricultural policy at the federal level.

Dale Moore is executive director for public policy with Farm Bureau and says there were several policy victories to celebrate.

“We started off the year with the president taking a big step at regulatory reform, which for us, included the Waters of the U.S. or WOTUS rule that has caused so much concern among farmers and ranchers,” Moore says.

Going further into the new year, Moore says one of the many items the Farm Bureau will be watching is work on the nation’s infrastructure.

“Particularly as we look at roads, waterways, attention being paid to telecommunications, those are some efforts we’ve seen some real progress on,” Moore says.

Moore says development of the 2018 Farm Bill is another huge topic. The Farm Bill development process was underway well before the calendar turned to the new year.