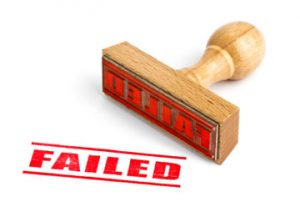 Have you ever failed at something?

We all fail at sometime or another, but it’s what comes out of that failure that makes us a success.

Jesus always pointed people towards a better version of themselves particularly when they failed.

Saul killed Christians, but God decided to sweep into His life and he instead preached the gospel to anyone who would listen.

David failed at staying pure, but God redeemed him to be a man after His own heart.

Moses failed at speaking, but God helped him lead a nation to freedom.

Peter failed at claiming to know Jesus, but God turned Peter into a walking testimony of His existence.

The woman at the well failed at being faithful, but God changed her to be a faithful follower.

Thomas failed at trusting, but God created in him a heart of faith.

So you’ve failed at something? So what! God takes us past our failure, and move us into our purpose.

Prayer: Lord, thank you that when I fail that isn’t the end of my story. Thank you for using me past my failure. In your name I pray, Amen.”