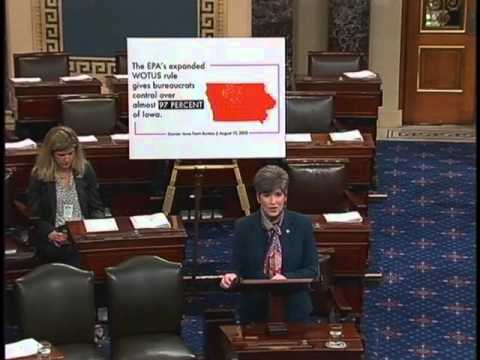 The Senate passes Senator Joni’s Ernst’s resolution of disapproval which would put an end the expanded definition of the WOTUS rule.

The resolution of disapproval passed the Senate Wednesday with bipartisan support.
Senator Ernst says there is a fallacy out there that the WOTUS rule won’t change farming operations.

“Oh, Farmers are excluded from this definition. That is inaccurate because there are other examples where within this rule it does not exclude any topical applications of other types of products where its herbicides or fertilizers. So there is a lot of confusion about that. Basically farmers do not know what qualifies as waters of the U.S. Is it a water that runs into a water that runs into another water which might run into another tributary which might lead into a water of the U.S.,” Ernst said.
Ernst adds many of the federal agencies in Iowa don’t even know what a water of the U.S. is.

“They don’t know how they permitting process is going to work. There is disagreement between the Army Corps of Engineers and the EPA on how some of these bright line distances were arrived at. So there is so much confusion out there, even our federal agencies don’t know how to implement of define what a waters of the U.S. is,” Ernst said.
She says in the midst of that there are many farmers currently engaged in conservation projects.

The resolution of approval now moves to the House.