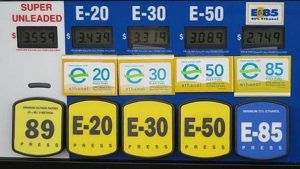 Half the states and Washington D.C. have broken through the so-called “E-10 blend wall,” according to recent data from the U.S. Energy Department.

25-states have smashed through the blend wall of E-10 market saturation, consuming more than 10-percent ethanol on average in 2015.

Ethanol made up 12.5% of the gasoline pool in Minnesota and 11.5% in Iowa, along with 10 percent in Illinois, according to Energy Department figures. Last year’s national average ethanol blend rate was a hair over 9.9%, undermining legislative efforts by some to reduce it to 9.7%.

Renewable Fuels Association President Bob Dinneen says more recently, the average has been over ten percent. “We blended 10.4% ethanol into gasoline. I believe that lays bare this argument about the blend wall. The fact that oil companies out there are saying that they can’t possibly blend more than 9.7% ethanol. Well, in fact, you are,” Dinneen said.