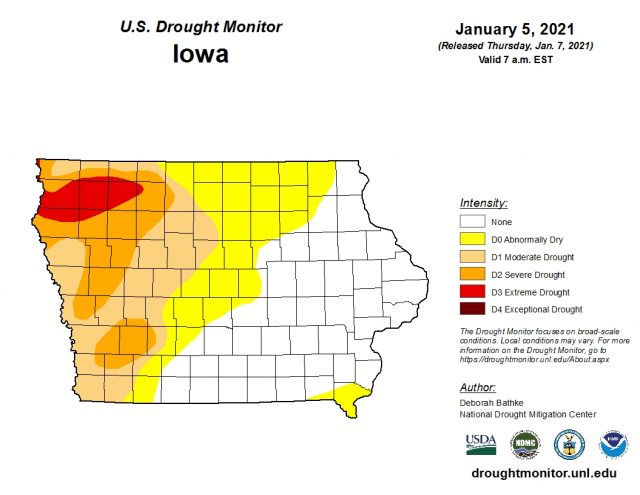 The US Drought Monitor on Thursday showed Plymouth, Cherokee, Sioux, O’Brien, Clay, Palo Alto, Dickinson, and Osceola counties remain in a pocket of D3, or extreme, drought. Southwest Iowa saw a little improvement from recent snowfall, while the rest of the map is similar to what’s been seen over the last four-to-five weeks – according to state climatologist Dr. Justin Glisan.

“This is a quiet time of year,” Glisan said. “It’s the driest season. January, in fact, is the driest month for the state of Iowa. Typically, we expect statewide about nine-tenths of an inch of liquid precipitation. We had an active storm track the last part of December into January that had anywhere from 1-2 inches of liquid equivalent precipitation across southeastern Iowa. We did see a little improvement towards southwestern Iowa. This was basically more to matchup with recommendations from Missouri, but we have seen some slight improvement in that D0 region.”

Dr. Glisan doesn’t expect Iowa’s drought monitor map to show much change over the next couple of months, reflecting the same pattern that was seen all of December.

“Given that we’re in the December, January, and February meteorological winter, we don’t expect a lot of improvement on the map, but we also don’t expect a lot of degradation,” Glisan said. “That’s unless on one end or the other we do see an active pattern that sets up, but that does necessitate soil being not frozen for infiltration, and/or right around freezing on that four-inch subsoil profile.”

The latest US Drought Monitor can be viewed here.