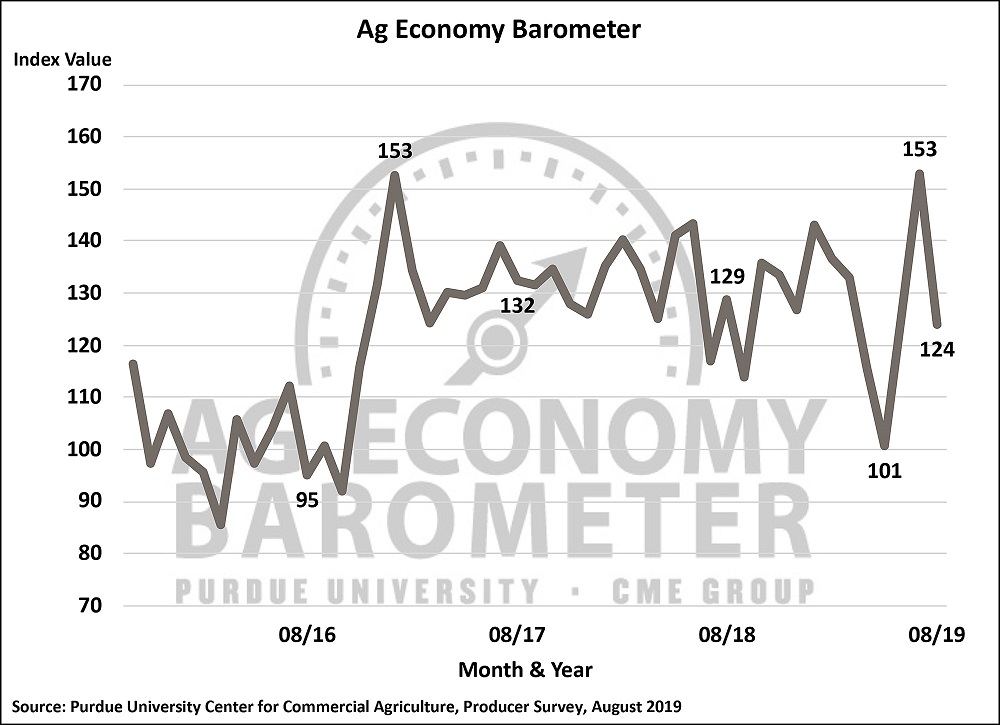 There has been a significant drop in the most recent Purdue University/CME Group Ag Economy Barometer, and both the current conditions and future expectation indices contributed to the decline. The August barometer dipped 29 points to a total of 124. Expectations for the future seemed to dominate this monthâ€™s drop.

â€œThe Index of Future Expectations fell to a reading of 125 compared to 159 a month earlier. The Index of Current Conditions also fell from a reading of 141 a month ago to 122 in the month of August,â€� said Jim Mintert, principal investigator and director of the Purdue Center for Commercial Agriculture.

He explained that the sharp drop in many commodity prices in July and parts of August dominated farmer sentiment. But trade is a major factor as well. Since March the monthly survey of 400 U.S. farm producers has asked whether the trade dispute with China will be settled soon.

â€œInitially 45 percent of the farmers said that they expected a quick resolution to the soybean trade dispute, but that has dropped off significantly in recent months,â€� he explained. â€œIn the August survey, the percentage expecting a quick resolution actually rose a bit compared to the prior month, hitting 29 percent compared to 22 percent earlier. We followed up by asking farmers if they expect this soybean trade dispute with China to be resolved in a way thatâ€™s beneficial to U.S. agriculture. The percentage of farmers expecting a beneficial outcome declined this month from 78 percent in July to 72 percent in August, and the percentage expecting an unfavorable outcome rose from 19 to 25 percent here in August.â€�

The survey was conducted between August 12 and August 20, 2019, so almost all of responses came after the USDA August 12 Crop Production report. Producers were asked about the Market Facilitation Program payments, and 71 percent felt this new round of MFP payments will either â€œcompletely or somewhat relieveâ€� their concerns about tariffsâ€™ impact on 2019 farm income. But 29 percent said it doesnâ€™t alleviate their concerns at all.

As for next year, over half of respondents expect more assistance then too. Fifty-eight percent of farmers in the August survey said they expect another MFP payment to be made to U.S. farmers for the 2020 crop year. That would suggest a majority of farmers are counting on payments from USDA helping to make up future income shortfalls.

This monthâ€™s report also discusses whether producers feel now is a good or bad time to make large investments in their farming operations and their expectations for farmland values. See the barometer details at https://purdue.ag/agbarometer.