Thanks to Ron Hays of Rural Oklahoma Network 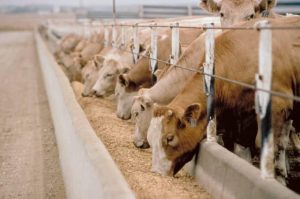 The USDA released this month’s Cattle on Feed report on Friday, revealing fairly large percentages in the net result. However, the most notable takeaway drawing attention is the fact that the report shows there is currently one percent fewer cattle than a year ago.

Farm Director Ron Hays caught up with Extension Livestock Market Economist Dr. Derrell Peel for his initial impression of the report, which he calls slightly bearish but overall neutral and well anticipated.

Peel points out though that it is important to keep in mind for this November’s placements in marketings that there was one extra business day this year compared to a year ago.

“So, on the face of it,” he said, “that adjusts both the placements and marketings number by about five percent.”

Another takeaway from the report, says Peel, is that the marketings number was up even more than the placement number which has been the case now for a number of months. He explains that this shows even though we’re moving more cattle through the system, we’re doing that very aggressively and that’s what keeps the cattle on feed inventory down.

“It was down about 1.4 percent – pretty close to the same level that it was down last month from a year ago,” Peel reports, adding that, “the best you can do to help yourself as an industry in this case, is to move those cattle through the system as well as you can.”

Overall though, Peel concludes that this year has finished out as good as could have been hoped for in the current climate.

“2016 has been a pretty good year in terms of the way feedlots have managed cattle inventories and flows and certainly as the market changed from what they were doing this time last year,” Peel said, “where they did in fact create a worse wreck by holding cattle and failing to move them through the system on a timely basis.”