Now the serpent was more crafty than any of the wild animals the LORD God had made. He said to the woman, “Did God really say, ‘You must not eat from any tree in the garden’?” -Genesis 3:1 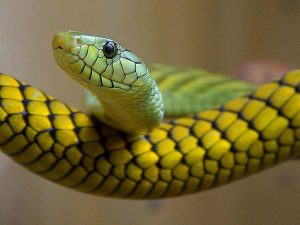 I think my husband looks great with facial hair. He likes having facial hair, but for some reason, he feels like his doesn’t measure up compared to men around him. One day, he decided to look up getting beard oil to help with the growth and look of his facial hair. A couple days later pills came in the mail, from the company he had put information into wanting to know more about. The pills stated they helped with hair growth. However, they also stated that they were not FDA approved. I urged him not to put a single thing on him, or in him that has not been tested or approved. He agreed, threw it in the trash, and we went on our way.

A couple days later I was checking our online bank account when I saw a $89.99 purchase that seemed eerie and suspicious. I knew I had not made this purchase. So, I called him and he assured me that he had not made this transaction either. After digging around a little bit, we discovered that it was the company who had sent the beard pills. That was odd. Harold called the company asked what that was for, demanded his money back, and that was pretty much the end of it. A couple days later I was checking our back account again (I guess I do this more than I realized) when I saw another $89.99 withdrawal. Harold at this point was boiling mad. In the past week we had lost $180.00 because of this company that continued to take money out of our account for no reason and without our permission. Harold was devastated and annoyed.

Since then, we have shut down that particular debit card, called our bank, and have gotten our money back. Money is money so it isn’t a huge deal. However, this all could have been avoided if Harold would have taken a step back and realized the illegitimacy that was behind this company. He bought into the obvious lie, but at that time he was too blinded to even notice. He was too focused on getting a product that would enhance his beard. He was willing to take the risk no matter what the cost.

I think often times this is true in our spiritual life. We begin comparing ourselves, reaching for things that satisfy. Everything in Satan’s being wants us to buy into the lie. Think about Adam and Eve. If he could just convince them what they had wasn’t good enough, or what they didn’t have was better, then they would experience true separation from God. This is true for us still today. The serpent is crafty, he wants us to buy into the thousands of lies happen around us daily. Have you caught yourself buying into a lie the world has fed you? Have you been blinded from the truth because you are pursuing something seemingly pointless? Choose today not to buy into the thousands of lies that the serpent will throw at you.

Prayer: God, I pray that you help me to see the lies that are thrown at me daily. Help me to fully distinguish truth from deception. Allow me to notice when the serpent is on the move in situations. Protect my mind and thoughts. In your name I pray, Amen.