Drip down, O heavens, from above, And let the clouds pour down righteousness; Let the earth open up and salvation bear fruit, And righteousness spring up with it. I, the LORD, have created it. -Isaiah 45:8 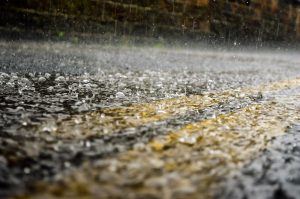 In September, Harold and I went to a concert. Afterwards, it was down pouring. I’ve seen rain before, but I don’t think I’ve ever seen this kind of rain before. It was the hardest rainfall my eyes had ever witnessed.

There were about 16,000 fans in attendance that were not willing to get wet. So, they decided to stand at the door. It’s not a pleasant seen when some fans are trapped inside an arena because the others won’t just go out into the rain. It caused a major traffic jam, except in people version.

Harold and I, eventually made our way to a main exit. We laughed at the people refusing to walk in the pouring rain, and darted out the door. We giggled, sprinting down aisles of parked cars, laughing, and screaming as we ran around looking for ours.

I typically don’t hate the rain as long as I’m not having to walk out in it, or if I don’t have something scheduled to do outside. There is quite a bit of people I know though who despise when it rains. It makes them tired, grouchy, and feel a bit like the weather.

I have come to the realization that without the rain there is no beauty in the summer. Rain gives depth, it gives beauty, and it gives roots. If a plant is only exposed to sun and no rain, it becomes dry, flimsy, and dead.

Too many times we curse the rain in our lives such as suffering, trials, hardships, but the truth is without rain nothing grows.

Friend, don’t curse the rain in your life. Brave the rain. The rain is the starting point of something beautiful beginning.

….As for the day we darted into a torrential downpour. We were soaked, drenched, and saturated four our hour and a half drive home. However, braving the rain was the best decision we made.

Prayer: “God, thank you for the downpours of rain in my life. Help me to take notice of the things you are creating during rain. In your name I pray, Amen.”