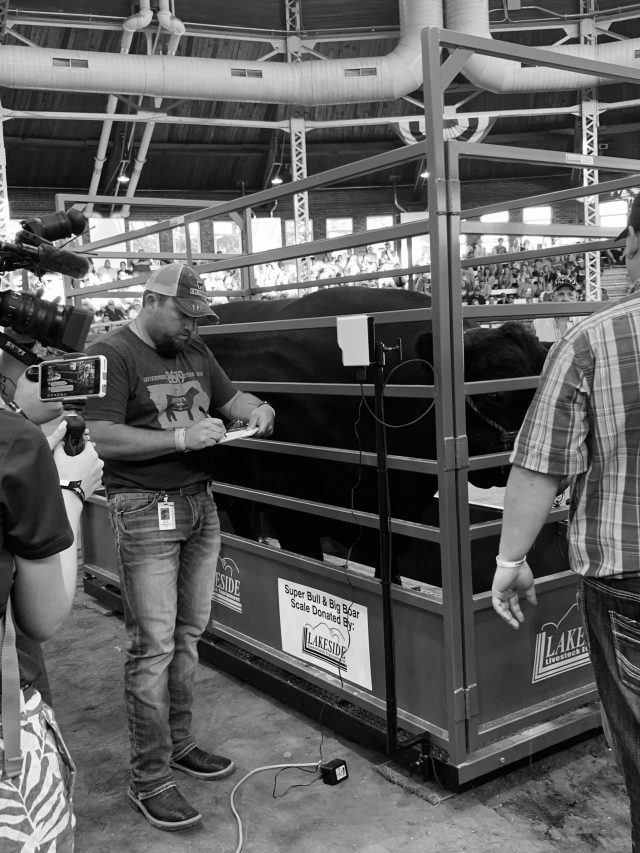 “Lots and lots of feed!” This was the general consensus for the day of all things “big” here at the Iowa State Fair. Yesterday afternoon cattle, sheep, and swine producers led their heavyweight livestock into show rings with the hope of claiming the title of “Big Ram”, “Big Boar”, or the “Super Bull”.

The Iowa State Fair pavilion had filled to its brim with wide eyes by the time the Super Bull contestants stammered out of their trailers for the highly anticipated weigh-in. Two angus, one Gelbvieh, one Chianina, and one Hereford were in the running for the title, but the 6-year old angus bull, owned by Lynn Henry of DLH angus of Indianola, took the blue ribbon with a final weight of 2710 lbs of America’s fine entreé.

Though this is an exciting feat for Henry, he is even more excited by his family’s winning streak. DLH Upward 122, the 2019 reigning Super Bull, is half brother to 2017’s winner, owned by Henry’s uncle, Marvin Spear.

While many producers attributed their animals incredible size to feed, Henry made sure to point out his bull’s genetics as the reasoning for his new title.

Henry said, “Soundness and structural correctness are the key to getting bulls to look this good. And I have my uncle to thank a good amount for that. Ya know, I think he said he’s competed five times and won it twice. He kinda knew how to do this and had a bit of expertise here.”

When talking with Spear, he also humbly relished in the excitement for his nephew. Following my asking whether or not Spear would add the win to his tally, the man laughed and grinned saying “I suppose I’ll have to, huh?” With odds at 50/50, how could you not?

Additionally, I had a minute to drop in at the Big Ram competition.

Marshalltown, Iowa’s Jesse Stayner showed Clark, a three year old Shropshire. Weighing in at 452 pounds, Clark had over 100 pounds up on his opponents.