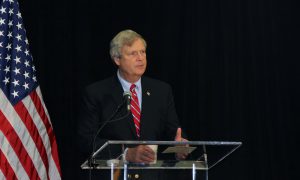 It’s the end of along run of elected and appointed offices for Agriculture Secretary, Tom Vilsack. In less than a month, Vilsack, along with the Obama administration, will exit Washington, D.C., as the incoming Trump administration takes over.

Following the election in November, Vilsack reflected on his eighth years of leadership at USDA.

“I think that we can make the case that it’s been an interesting, historic, record breaking eight years. I am in the process of finalizing a memo that I will provide for my successor. It starts with making sure that he/she understands what kind of incredible opportunity they are going to have.”

Vilsack hinted last week he could be seeking more work in agriculture policy after his time at USDA closes next month, but immediately following the election, Vilsack said whatever the next may be, it will include a commitment to family.

“30 years I’ve been engaged in public service in some form or another.  When you do that, you sacrifice a lot of time. I think the next phase of life could include agriculture, advocacy for the people i love and care about, but it will also include a commitment family.”

Vilsack is the longest-serving member of President Barack Obama’s cabinet, serving in all eight years of Obama’s time in the White House.

The secretary spoke fondly of his six year old grandson showing up at his house in Mt Pleasant to see if Grandpa had time to play.